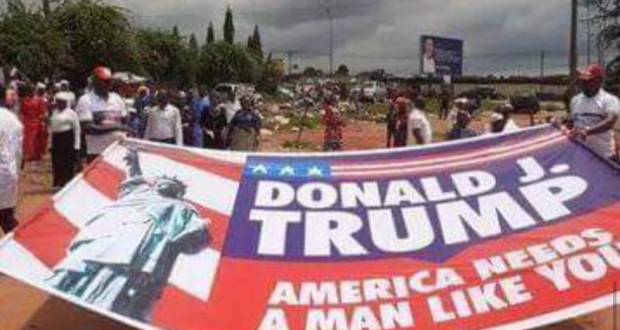 US 2020: President Trump commends supporters in Nigeria, calls there rally a great honour

Republican Presidential aspirant in the US Presidential election, incumbent President Donald Trump on Tuesday, he took a break from his presidential race to thank a group of Nigerians who recently held a campaign rally in his honour.

“A parade for me in Nigeria, a great honour,” the US president wrote as he reposted a video of the rally.

In far away Onitsha, Anambra state, the group held the pro-Trump rally during which they mobilised support for Trump who is battling Joe Biden in the ongoing election.

Wearing white and blue uniform, they waved the United States flag alongside banners and placards with various inscriptions such as, “Make America Great Again”, “President Trump: America Needs A Man Like You”.

As they marched through the streets, the group — mostly women and youth — chorused victory songs for Trump whom they said deserves another term in office.

Ironically, another term for Trump might mean another nightmare for Nigerians, if the US president continues with his immigration policies which have often targeted Nigerians.

Only a month ago, the Trump administration proposed guidelines that could restrict some international students, including those from Nigeria, from admission of more than two-year period.

Earlier in the year, the US president imposed a ban on immigrant visa — issued to those who planned to relocate to the US — on Nigeria and six other countries.

His immigration policies notwithstanding, pro-Trump sentiments have rapidly grown in Nigeria since he became the US president in 2016.