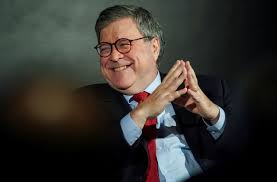 US Attorney General resigns amid feud with Trump

Attorney Attorney general’s William Barr says he will resign next week, ending a tenure in which the President Donald Trump loyalist carried the administration’s “law and order” message but ultimately dealt the most credible blow to Trump’s unfounded claims that the 2020 election was littered with fraud.

His departure was announced by the President on Twitter moments after counting in the Electoral College put President-elect Joe Biden over the 270 votes needed to formally secure the presidency, CNN reports.

Despite escalating tensions between Trump and Barr that had burst recently into public view, the President framed Barr’s departure as amicable.

“Just had a very nice meeting with Attorney General Bill Barr at the White House. Our relationship has been a very good one, he has done an outstanding job! As per letter, Bill will be leaving just before Christmas to spend the holidays with his family,” Trump tweeted, announcing the news.

Despite Trump’s upbeat message, he had been seriously considering firing his attorney general as recently as Sunday, people familiar with the matter said, though officials did not believe he would go through with dismissing Barr immediately.

Over the past several months aides have discouraged Trump from firing Barr. The President seemed to find a compromise way of seeing Barr out by tweeting about his “very good” relationship with him.

But the two men’s relationship was not, by aides’ estimations, very good. Trump on Friday again told officials in a meeting he wanted to fire Barr, and over the weekend did not seem moved off his position