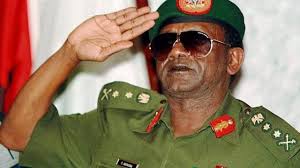 Why Abacha remains our hero in Bayelsa- Gov Diri

The Governor of Bayelsa State, Douye Diri, has applauded the  former military dictator Sani Abacha, saying that he remains a hero to the people of the state by creating the oil-rich state 25 years ago on October 1, 1996.

Diri said  this during a thanksgiving service on Nigeria’s 61st independence and Bayelsa 25th anniversary at the King of Glory Chapel in Government House, Yenagoa.

Praising Abacha, Governor Douye said, “Let me use this medium to thank one man. He may not be popular in Nigeria but to me and all of us Bayelsans; we see him as a great man, a hero. The man who by the stroke of the pen signed the creation of Bayelsa State; I am talking about the late General Sani Abacha.

“We acknowledge him as a state and people. By his singular assent, he created this state with just eight local government areas, which was less than the constitutional requirements.”