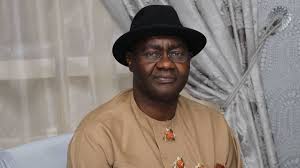 Why APC may experience another failure in rivers- Abe

Senator Magnus Abe has knocked  the Minister of Transportation Rotimi Amaechi for saying that the 2023 governorship position of the All Progressives Congress in Rivers State has been zoned to Riverine areas.

Addressing his supporters in Port Harcourt, Abe  said he was happy when the leader of APC in the state in one of his functions said there will be no imposition of candidates but was worried when he allegedly made a volte face in a function Ogu Bolo area that he has asked Riverine People to nominate governor ahead of 2023 general elections.

He told his supporters to see Amaechi’s comment as a personal opinion,

Warning APC, he said that  if the national ruling party continues with the same way it went before 2019 general elections, the unfortunate incident that happened against APC in the state may repeat itself.

“You have made a statement in the history of Nigeria Politics that nobody can easily erase. The last move that they made did it work? It did not work because you said the issues in the party must be addressed. Nobody can deny the sacrifices we all made to birth the APC in Rivers State.

“After the Supreme Court judgement we issued a statement. The statement was bastardized all over the social media, people came out to say all sorts of things, they said I said I had given up politics, I had been retired, I will be irrelevant to the politics of Rivers State. It is not possible? Nobody, can achieve that in Rivers State because politics is about people.

“I expected other leaders in the party to reciprocate in a manner that will open a window of opportunity, peace and reconciliation in the party. I didn’t hear that but I held my peace and I continued to insist that there must be peace for this party to move forward. A few days later, I started hearing some very very positive comments from the Minister of Transportation (Amaechi). When he went to Gokana he said there will be no imposition in the party and that party members will be allowed to choose a candidate for themselves.

“That noise continued for a few days, but a few days ago, I saw a video clip of the same man in Ogu-Bolo announcing that they should go and prepare for a Riverine governor and that the governorship has been zoned to Ogu-Bolo, Andoni, Opobo-Nkoro, Asari Toru, Akuku Toru, Degema and I said is that a sign of change? It is not. Let me say it here, loud and clear, that what the minister expressed in Ogu-Bolo is his personal opinion, he does not speak for all of us in the APC. When you want to zone, there must be a process, there must be consultation, the people that are being zoned in must understand why they are being zoned in and the people that are being zoned out, must understand why they are being zoned out.

“If you just stand, carry a microphone and begin to zone to unzone and unzone to zone, everybody knows what you are doing and I want to stand here and say it will not work. If that was an attempt to set the Riverine people against the rest of the state, I want to stand here to say that the Riverine people that I know are smarter than those who are trying to use them. It is a poisoned chalice, it is a Greek gift, it will get you nothing because it is not well-intended and it is not well intentioned.

“It is time for you to put away that anger, put away that annoyance, go back, let us go back to our different wards and units and begin the important process of rebuilding this party, don’t mind what they are doing, ignore them completely because everybody who is a politician can tell between serious politics and grandstanding gamemanship.Grandstanding and game-manship will lead us to nowhere.

“Those issues must be address within this party, and there would be consequences if they are not addressed, don’t let anything phase you, don’t be afraid, be resolute, be firm you understand, and stay committed, justice will be done.

“I say it boldly that this battle is about justice in the APC in Rivers State and no amount of lies, no amount of propaganda, no amount of intimidation, no amount of power is going to make us give up our battle for justice and fairness within this party,” Abe said.

Previous: Buhari’s foreign medical trip a disgrace to Nigeria- PDP
Next: Medical Trip: Buhari will rule from UK, transfer of power to Osinbajo not necessary- Shehu