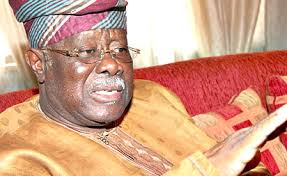 Why Bode George should be expelled from PDP-Atiku’s camp

Pearse made this call at a news conference on Wednesday at the PDP secretariat in Lagos.

Wike, colleagues and other aggrieved stalwarts announced the formation of Integrity Group on Sunday.

They reiterated their demand that National Chairman Iyorchia Ayu should resign for a Southerner to succeed him since Atiku hails from the North.

Pearse said the expulsion of George from the party would give PDP a fair chance of victory in Lagos in 2023.

He noted that members, including the ward chairmen, insist George leaves the party “for it to survive and win the election”.

“This is the voice of the people and these ward chairmen are the vehicle to the voices of our members.

“We are appealing to the party leadership to send a notice of expulsion of membership to Chief Olabode George”, he said

Previous: Adamu: Nigeria not ready for BVAS, other advanced technologies
Next: Atiku to have a meeting with five aggrieved Governors soon- Okowa