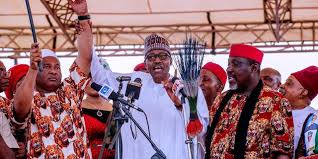 President Mohammadu Buhari has told Igbo leaders during his official visit to Imo state yesterday that it is unthinkable for the South East region to break from Nigeria.

Also, Ohanaeze Ndigbo, seized the opportunity of the visit to express what it described as the most urgent and imperative need of the region.

While acknowledging the resourcefulness and enterprising spirit of Igbo people, the President said that one fundamental thing about the Igbo people is that there is no town one will visit in Nigeria without seeing the Igbo being in charge of either infrastructure or pharmaceutical industry.

Buhari added: “Therefore, it is unthinkable for me that any Igbo man would consider himself not to be a part of Nigeria. The evidence is there for everyone to see that Igbo are in charge of Nigeria’s economy.”

Buhari was in the state to commission projects by Imo State Governor Hope Uzodimma.

During an interactive session with the President, attended by about 200 Igbo leaders drawn from the five Southeast states, President General of Ohanaeze Ndigbo, Prof. George Obiozor, said the foremost need of the region is security.

According to him, the security of Ndigbo in Nigeria and beyond has become a compelling primary responsibility of serious concern for Ndigbo.

“Regrettably, our Southeast zone has recently become a theatre of conflict, negating the peace-loving nature of our people. In this context, Ohanaeze Ndigbo calls for the establishment of a zonal and state police apparatus to support and complement the existing federal security architecture,” he said.

Obiozor noted: “The Southeast zone is in dire need of more infrastructure sponsored by the Federal Government, among these are roads, bridges, railways and ports.”

Obiozor said in spite of threats of secession facing the country, no secessionist element can succeed in an atmosphere of good governance based on equity, justice and fairness to all the citizens.

He expressed optimism that the visit would “mark the beginning of a new chapter of dialogue, cooperation and understanding” between Ndigbo and the Buhari administration.

One of the Igbo leaders expressed disappointment with the President for throwing away a golden opportunity to reintegrate Igbo people, earn their support and…improve his relationship with them.