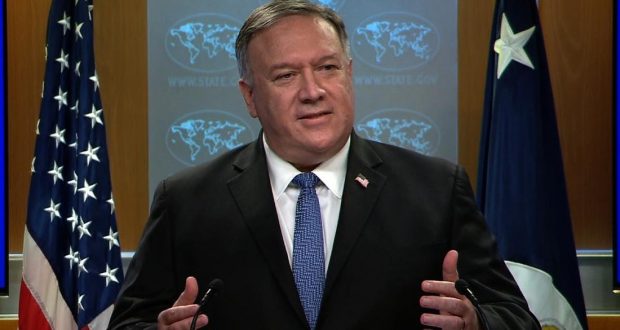 Why Trump has refused to accept defeat- Secretary of State, Pompeo

US Secretary of state and one of the major henchmen of President Donald Trump Mike Pompeo, US secretary of state, has shed more light on why the President has not conceded defeat in the just concluded presidential election where he glaringly lost to Joe Biden.

Giving insight on why Trump has remained adamant in accepting defeat, Pompeo  said that they are working to unravel the facts that reflected the will of the people in the historic election

In his words“: We’re counting votes, when the process is complete there’ll be electors selected, there’s a process the constitution lays it out pretty clearly,” he said.

He added that the world should have confidence in the transition that would usher in new government .

“The world should have every confidence that the transition necessary to make sure that the State Department is functional today, successful today, and successful with the president who’s in office on January 20th.

“And you know it’s ridiculous. And you asked it because it’s ridiculous. You asked a question that is ridiculous, this department cares deeply to make sure elections around the world are safe and secure and free and fair.

“We often encounter situations where it’s not clear about a particular election. We work to uncover facts, we work to do discovery, to learn whether in fact the outcome, the decision that was made reflected the will of the people.

“We want every one of those votes to be counted in the same way we have every expectation every vote here in the United States will be counted too. It is totally appropriate, the United States has an election system that is laid out deeply in our constitution, and we’re going to make sure that we get that right

Previous: “Balarabe Musa was a voice of the voiceless,” Buhari reacts to politician’s death
Next: “Are Buhari, Tinubu terrorists for protesting before? Fani-Kayode attacks FG for ‘persecuting’ #EndSARS protesters