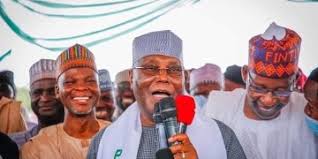 Joining the former number two man was  Governor Ahmadu Fintiri to receive the defectors at the Ahmadu Ribadu Square in Jimeta, Yola.

It was learnt that the defectors were led by notable politicians from mostly the opposition All Progressives Congress (APC).

Among the leading defectors were Mr Kobis Arithemnu, a former Secretary to the Adamawa State Government as well as Mallam Bello Jada, a famous politician popularly called Calculate.

Other leading defectors were Hon Nedo Kufaltu, Commodore Sali Bodes (rtd), Mr Phillips Gatua, and Daniel Bwala, most of them from the central and southern parts of the State.

Speaking to them, Atiku said that they wasted a lot of time,  in a failed party but were nonetheless welcomed into the PDP.

Atiku, speaking in Hausa, said the new members’ political mistakes of being in the APC were forgiven and boasted that PDP was poised to take over governance in 2023.

He called on members of other parties to join PDP for the development of the State and country.

Fintiri promised that the new members would be given level playing ground with the old members and there would be credible PDP congress in the state.

Adamawa PDP chairman Barr Tahir Shehu, said the occasion marked the beginning of the collapse of other political groups.

Col. Andrawus Sawa (rtd), who spoke on behalf of his colleagues, said they decided to join PDP having been fully convinced with its ideologies