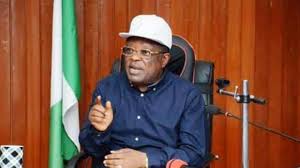 The Chairman of the Peoples Democratic Party, PDP, Ebonyi State chapter, Elder Fred Udeogu has  said that anyone supporting the government of President Mohammadu Buhari has mental problem.

According to him, those wishing Nigerians to have Muhammadu Buhari’s kind as the next President of Nigeria come 2023 needs his psyche to be reexamined.

He made this known while reacting to a statement credited to Ebonyi State Governor, Chief David Umahi wishing Nigerians to have a kind of Buhari as the next president of Nigeria.

He chairman said that it is uncalled for that President Buhari, whom his own state governor, Aminu Bello Masari, and other notable northern leaders allegedly acknowledged had failed

He said: “If it is true that the governor said such thing in Abuja, not in Ebonyi state, that someone who is like President Muhammad Buhari should become the next President of Nigeria come 2023, it is his own personal opinion.

“He is not our spokesperson, we elected some persons to go to Abuja and speak for us, not until then, he shouldn’t speak for us but if at all he said that, well, he is free to speak his mind because that is what his mind told him to say and he has said it. And nobody can change what he has said.

“The governor said what his spirit told him to say but I don’t know how many families in this country will pray for us to have a kind of person like President Buhari as the next President of Nigeria. Really I don’t know.

“Whichever way it goes, even his own people from the state, I don’t know how many people can come out today to open their mouth and say, Yes, we had it so good since the last 6years the present federal government came to power.

“It is just the elected people, especially the governors and few others who are in the government that can say yes, that things are moving well, outside that, things are not the way it’s supposed to be.