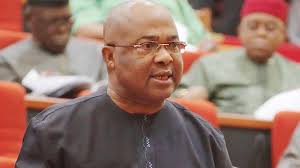 APC may perform badly in Imo in 2023- Former Speaker

Ahead of the 2023 general elections, the  former Speaker of Imo State House of Assembly, Rt. Hon. Geoffrey Dikeocha has said that the APC in Imo State is likely to lose Owerri zone in the forthcoming elections.

According to him, such trend is possible due to its handling of the party’s affairs.

He lamented that the ruling party in the state led  by Hon. MacDonald Ebere, has not done enough to unite members of the party, especially the aspirants for various positions.

He stated this during the APC Owerri Zonal Stakeholders’ meeting, which was held on Thursday, at the party’s secretariat, Owerri, that ended in almost a commotion.

He hinged the possibility of the party losing if it fails to provide a level playing ground for both members and aspirants.

Dikeocha said,” I want to state it categorically that our party, the APC may lose the Owerri zone going by the way the affairs of our party are piloted.

“We should realize that the Owerri zone comprises nine local government areas. We should not make the mistake of losing it all.

“I am saying this today because it is becoming obvious, and I tell you that if the party fails to provide a level playing ground for both members and aspirants, it is going to be a colossal loss for our party.

“I am the Director General of Prince Alex Mbata Campaign Organization, and I know what I am talking about. My principal has been supportive to our party, the APC, both financially and otherwise. And we shall continue to show our unalloyed support. Let us do the right thing in order not to lose the Owerri zone.”

Previous: 2023 Presidency: Elect me as your Chief Servant, says Ogbonnaya Onu as he joins race
Next: Gov Soludo sets to present 2022 revised draft budget to Assembly