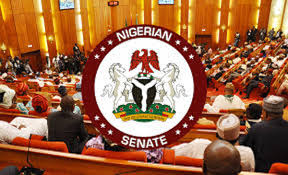 E-transmission of Election Results: We bowed to interests of the people- Sentate

The Spokesman of the Senate, Ajibola Bashiru has said that Senate bowed to public expectation and interest by reversing itself on electronic transmission of election results by the Independent National Electoral Commission (INEC)

It will be recalled that at a plenary yesterday, the Senate examined the recommendations of the Conference Committee of both chambers which dumped the version of the amendment Act earlier passed by the Senate.

The Senate in plenary through voice vote okayed e-transmission of results by the electoral commission.

The Senate went further to endorse the proposal that INEC should be free to use electronic voting.

The Senate also approved an amendment, which provides that political parties would henceforth, use only the direct mode of primary to nominate candidates for elections.

Shedding light on the decision, Senator Basiru said the conference committee looked at four sections of the proposed bill-43, 52, 63 and 87.

On Section 43, he said the committee allowed INEC to deploy electronic machines while the party agents are also at liberty to inspect the machines.

The senator said Section 52, which has to do with the transmission of results, raised two concerns.

The first concern, in his view, is the possibility of disenfranchising the electorate in areas where there are no networks.

The second is the possibility of hacking the system.

However, the Senate spokesman pointed out that when the Act was reviewed, it was discovered that Section 63 of the bill passed in the two chambers had provided a clue.

Quoting a part of the section, Basiru said the implication is that election must be concluded and the result entered on the form at the polling booth.

Basiru added that while the recourse to the NCC has been discarded, INEC can resort to the technological method of choice.

He said: “We use the word transfer, not transmit, after the recording of results at polling units.”

Basiru also shed light on the provisions on direct primaries, stressing that INEC now had a constitutional duty to vigorously monitor the primaries.

He said political parties are now mandated by the law to furnish the aspirants and the electoral commission with the guidelines and the party membership register.

The spokesman said the issue of armophorous membership will become a thing of the past.

He stressed: “Accreditation will be based on party register. Any aggrieved person can go to the Federal High Court to challenge any aspect.”