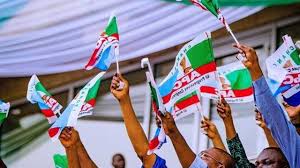 Lawmaker representing Bagwai/Shanono Constituency, in the State House of Assembly, Ali Ibrahim Isah Shanono has dumped  NNPP and rejoined the All Progressives Congress APC, after failing to obtain a ticket.

It will be recalled that he also moved to NNPP hoping to have a chance to re-contest his House of Assembly seat but was denied a ticket by Kwankwaso.

Not satisfied with the development, he deactivated his NNPP membership and rejoined APC in a letter sent to the House, notifying it of the development.

In a related development, the Commissioner nominated for appointment by Senator Ibrahim Shekarau into the administration of Governor Abdullahi Ganduje for the finance and economic development, Shehu Na’Allah Kura has resigned and joined his boss in NNPP.

The State Commissioner for Information, Malam Muhammad Garba indicated that Kura was appointed as Commissioner into the key ministry at the request of Shekarau after the 2019 election.

He explained that until the recent defection of his boss, Kura was a member of the All Progressive Congress (APC) and had previously served as Commissioner for planning and budget.