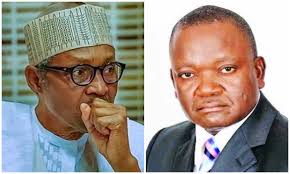 Governor Samuel Ortom of Benue State has revealed that over one Million, Five Hundred Thousand (1,500,000) people of the State have been sacked from their homes as a result of attacks by suspected Fulani herdsmen.

Ortom has  accused the Miyetti Allah Cattle Breeders’ Association of being responsible for killings in the entire nation.

Ortom during a press briefing in Makurdi the State capital, alleged that Miyetti Allah had vowed to continue the attack until his administration repeals its anti-open grazing law which was enacted in 2017 following clashes between herders and farmers

He said, “I watched with dismay yesterday the utterance of Myetti Allah, an association confronting government. It is not just the state government that they are after, they are also confronting the Federal Government.

“But unfortunately, the presidency will not come out to condemn or say anything concerning what the Miyetti Allah has said because it is part of them.

“It is unfortunate, our people are dying, we have over 1.5 million Internally Displaced Persons, IDPs, in Benue State and Miyetti Allah are coming out to claim responsibility for the killings and the pains that our people are going through. Then you will be telling me to keep quiet and not talk about it?

“Miyetti Allah has come out to say that if we don’t repeal our law, we will not know peace. Where are the security men? Where is the Federal Government? Why are they not arresting this killer group?

“This evil agenda that the Miyetti Allah has in collaboration with the Federal Government is not accepted. I commend the security agencies in Benue State, you have been doing your best in the Stat