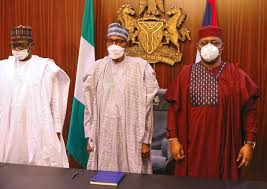 As tongues continue to wag on the defection of the former Minister of Aviation, Femi Fani-Kayode, from the camp of the Peoples Democratic Party to the ruling All Progressive Congress, APC, the Pro-Nigeria Group, PNG, has spoken out to condemn the red carpet given by President Mohammadu Buhari to the former Minister at the Presidential Villa.

The group made its opinion known by its Convener, Lai Omotola on Tuesday at the group’s Head Office at Maryland, Lagos during a press release.

According to Omotola, each state will experience competitive growth if state governments are allowed to collect VAT.

The Pro-Nigeria Group is calling on President Mohammadu Buhari to show the reason why Nigeria should still believe in his fight against corruption and believe him as the upholder of basic morals on the account of his invite to the Presidential Villa of Femi-Fani Kayode.

It should be noted that Fani-Kayode has purportedly moved into the All Progressive Congress (APC) from the major opposition, the Peoples Democratic Party (PDP). Our concern is that this same man is currently having a battle with the Nigerian state via the Economic and Financial Crimes Commission (EFCC) on corruption charges.

As the matter stands, the ex- Minister is a criminal suspect. Although the law states that one is innocent until proven guilty, it is morally unjust for a President to receive with a red carpet and stand beside a person against whom the EFCC has established a case, stating unequivocally that he had defrauded Nigeria; and the same matter is still in court; therefore, to now see him being honored by President Buhari has thrown hope for this country into the wind.

Therefore, we in PNG called on the President to talk about how he arrived at the controversial decision to host Fani-Kayode. Otherwise, history won’t be favorable to his part.