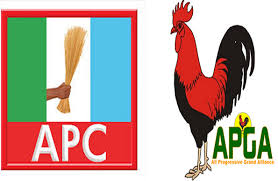 Nwagwu regretted that his former party (APGA) failed to internalize democracy in its afairs which he posited, resulting in mass defection of critical stakeholders and members to other political parties after the 2019 general election.

He said that he was joining the progressive party with thousands of APGA members and teeming supporters across Aba North and Aba South federal constituency, disclosing that more progressive minded members of APGA will be joining APC in a couple of weeks.

Nwagwu added that nothing was remaining in APGA as the party had been crippled over lack of leadership and high-handedness by those entrusted to steer the affairs of the party.

He thanked the leadership of the Abia State chapter of APC for the warm reception accorded him and teeming supporters, promising to uphold the ideologies of his party towards deepening democracy in the state and the country as a whole.

Receiving the ex-APGA House of Representatives Candidate and supporters into the APC fold, the APC Chairman in Ward 7, Aba North LGA, Mr. Obinwanne Ukaoha, urged the new entrants to abide by the constitution of the party by shunning any negative tendency that could amount to anti party activity.

He assured the APGA decampees that they would be treated equally with others that are already in the party and further charged them to work collectively towards ensuring the success of the progressive party in the coming 2023 general elections in the state and the country as a whole.

His words, “APC was built on ideologies which among is providing dividends of democracy to the doorsteps of the people, we urge you to work together, work assiduously to enable our party to form next government in Abia come 2023”.

In another development, Barrister Monday Ubani, former 2nd Vice Chairman of the Nigeria Bar Association (NBA), Monday Ubani, has criticized members of the National Assembly for the rejection of the electronic transmission of election results in the recent electoral reform bill.

He said that the federal lawmakers exhibited legislative rascality in their actions and insisted that the Nigeria electoral process needed the involvement of technologies to achieve acceptable and transparent elections.

Ubani, who is currently the Chairman, NBA Section on Public Interest and Development Law (SPIDEL), in a statement, maintained that the Independent National Electoral Commission (INEC) must be given a fair and less restrictive legal framework to carry out their constitutional duties of organising, undertaking and supervising elections in Nigeria.

He further stated that the National Assembly members, by passing the bill, clearly violated the constitution of the land which they swore to uphold, describing the unfolded scenario as the biggest embarrassment of the century