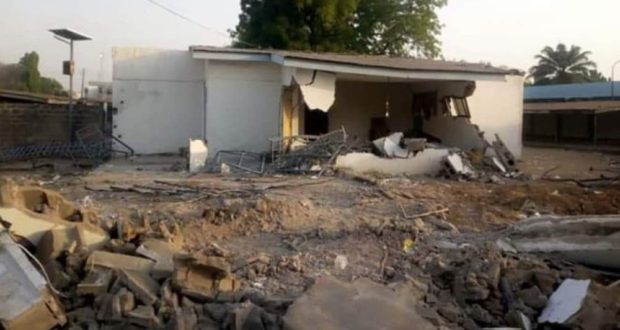 Kwara State chapter of the Peoples Democratic Party (PDP) has urged the National Human Rights Commission (NHRC) to probe the alleged use of live ammunition and tear gas to disperse aged women during the January 2 demolition of Ile Arugbo in Ilorin.

The party, in its January 8 petition, signed by its legal adviser, O.M Aborisade, emphasised that ‘the police’ denial of involvement in the act, either covertly or overtly, calls for investigation to the identity the armed persons in police uniform used by the governor’.

The petition reads: “We present this petition to your office to cause an enquiry to be carried out on the unfortunate, crude, and barbaric use of live ammunition and teargassing of defenceless women on the property known, called and referred to as Ile Arugbo in the G.R.A area of Ilorin, on January 2.

“Our petition is precipitated upon the use of maximum force on those old women, by yet-to-be identified uniformed men, who have been said not to be members of the Nigeria Police.”

The PDP also argued that ‘the denial of the state police command calls for inquest as to whether the governor keeps armed militia in the Government House to unleash fear and terror on the opposition party, and such other individuals that are opposed to his government or style of governance, Punch reports.

“There is also the need to compel and make it imperative on the governor to disband all the unauthorised and illegal armed men that were used for this shameful demolition as the police have denied their involvement”.

Previous: I didn’t ask Buhari to impose his candidate on Nigeria- Tunde Bakare
Next: How Buhari’s presidency is jeopardizing Nigeria’s unity- PDP