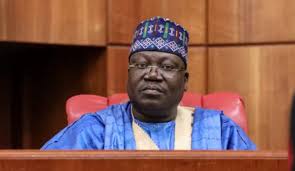 Senatorial Seat: Stakeholders warn Machina not to step down for Lawan

Some stakeholders have urged Alhaji Bashir Sheriff Machina, who emerged as the senatorial candidate of the All Progressives Congress (APC) ‘Zone C’ Senatorial District of Yobe State  not to step down for incumbent Sen. Ahmed Lawan ahead of the 2023 general elections

It was learnt that Lawan, who was an aspirant for the just concluded APC presidential primary election has approached Machina to allow him fly the senatorial flag.

Abba Maina Yusufari, leader of the stakeholders, in a press statement, said, “For keen observers of Yobe politics, no one is blind to the fact that our senatorial zone has enjoyed relative political peace and stability both at the House of Representative and even more at the senate with our brother,

The Senate President, Dr. Ahmed Lawan been in the saddle for a record three times. By the end of 2023, our beloved brother Sen. Ahmed Lawan will be spending 24 years at the National Assembly ie 16 years as a senator, and 8 years as a member of the House of Representatives,” he added

The statement added that for the sake of equity, stakeholders made bold to throw their support behind Machina to take over from Sen. Ahmed Lawan come 2023.

It warned adding that any attempt by Lawan to replace him from the seat will be a complete betrayal of the will of the people and a clog in the wheel of the peace, unity, and stability of the people.